We released a new kit today for the Ionic Polyhedra.
Here's a photo showing just one of the possible combination of beaded beads you can make from the kit.

The kit includes enough beads to make one regular sized Ionic Cube or Ionic Octahedron, plus four mini cubes or octahedrons.  Or, if you'd rather, you can use the smaller beads to make two antiprisms, two cuboctahedrons, or two rhombic dodecahedrons. The mixed metal combination of bead in this kit is one of my all-time favorites.
Posted by Gwenbeads at 2:24 PM No comments: Links to this post 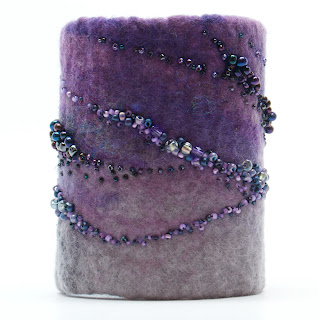 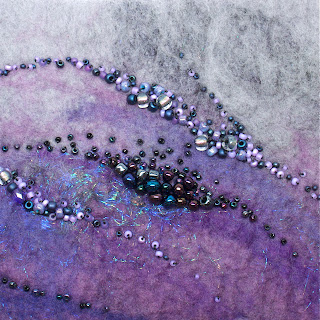 I finished a few new cuffs yesterday and listed them in my Etsy shop. The one above started as a pair, in purple and white wool (and other fibers) felted over hot pink silk fabric. When I wet felted them, the hot pink ran and dyed the white a very faint pink.  I really didn't like the colors, so I cut one up as an experiment.  This week, I got some black acid dye, so I was able to overdye the remaining one to make the pink into a nice middle gray.  Then I beaded it using freeform bead embroidery, following the lines in the felt.  I added snaps and a tag and called it done. 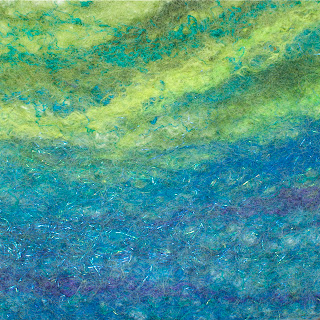 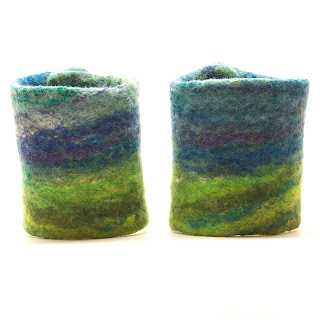 We have some new kits available at beAd Infinitum.

Kepler's Star Bracelet
The silvery seed beads in this bracelet are some of my all-time favorite beads.  There are also some purple beads in here that glow like dichroic glass.  You can make this bracelet in a length that fits you. 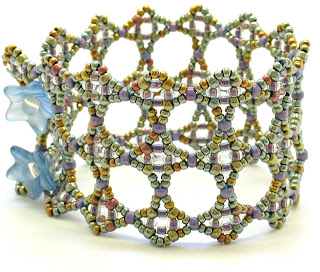 Ionic Polyhedra
The kit makes two beaded beads in these two color schemes.  You can make two cubes, two octahedrons, or one of each, like I did.

Blue Velvet Rosebuds
This is an older kit that we finally restocked.  I like the contrast of the rich matte blues with the shiny gold.  The kit makes 3 beaded beads and matches our Blue Velvet Four of Spades kits.  So, if you buy both kits, you can make a two-tiered pendant and matching earrings.

Posted by Gwenbeads at 10:33 AM No comments: Links to this post

I started weaving beads in 2004, and in that time I have made more jewelry and beaded beads than I remember.  I have sold and given away most of it, I think, but I have also been hoarding some pieces, not to wear, but just because I like looking at them in my bead box.  I am trying to get some of them listed in my Etsy shop and set them free.  Sometimes it's hard to let your art go, but I'm working on it.  Here are three new listings in my my Etsy shop.

Three Drop Earrings
I made this pair of Three Drop Earrings in 2006.  I wore them once, but I didn't like the earwires I used.  Today I exchanged the old ear wires to a pair I made more recently, and now they are finally done. 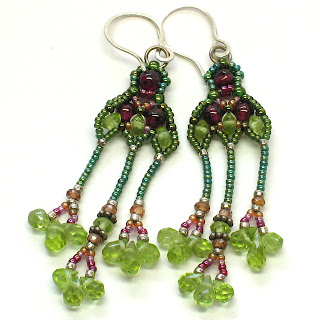 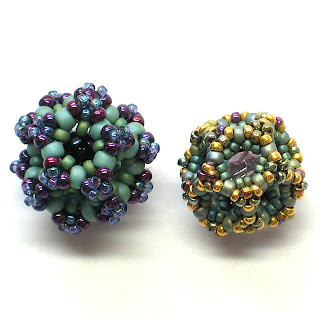 Mini Ionic Cube Earrings
These earrings are new as of last night.  These feature miniature Ionic Cubes in colors for fall.  I love the these color together, leaf and earth, the colors of the forest.  Nature makes good color schemes. 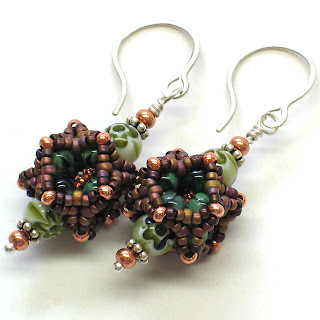 Posted by Gwenbeads at 1:43 PM No comments:

Years ago, I'm not sure when, I learned about this configuration of three links is know as the Borromean rings (or Borromean link),  I remember drawing doodles of this three-dimensional shape when I got bored with my professor's lectures. 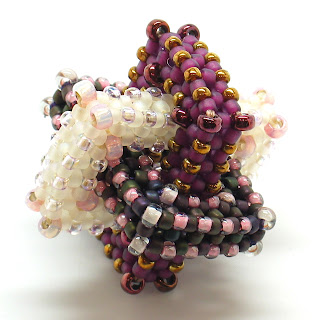 In 2005, I learned how to weave seed beads with box stitch (e.g., three-dimensional right angle weave), the link was a natural design for me to weave because I had drawn it so many times.  I made each rectangle with different colors of seed beads, but the rectangles are all the same size and shape, each measuring 27mm by 18mm by 7mm. 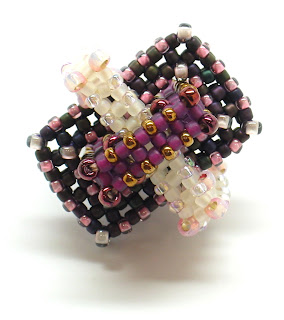 I find the Borromean link is particularly interesting because all three links are collectively linked despite the fact that no two of them are linked to each other.  To emphasize this, I left the dark link open so that you can take the three rectangles apart and put them back together again.

This piece was featured in my 2007 paper, "Three-dimensional finite point groups and the symmetry of beaded beads" (pdf) as and representation of the pyritohedral symmetry group Th. Personally, I remeber this symmetry type as "gift package" as I like to think of it as a the same symmetry as a cube box wrapped with 3 pieces of ribbon.  This Beaded Borromean Link is sold, but if you would like to learn how to make one for yourself, check out the pattern and kits for the beaded Borromean Links.

Several years ago, I had the honor of hearing George Hart give a talk on Orderly Tangles.  He presented this talk at in Banff, Canada in 2005 at a math and art conference dedicted to H.S.M. Coxeter.  (Coxeter was a mathematician, particularly interested in geometry, whose work inspired the great mathematical graphic artists M.C. Escher in the 1950s.)  Five years later, I find that Hart's talk was one of the most memorable talks from that conference, at least for me it was.

Hart writes, "In the 1970s and 1980s Alan Holden described symmetric arrangements of linked polygons which he called regular polylinks and constructed many cardboard and stick models. The fundamental geometric idea of symmetrically rotating and translating the faces of a Platonic solid is applicable to both sculpture and puzzles." Listeneing to Hart's talk, I learned about new ways of linking polygons.  The result is this set of four linked equilateral triangles. Each triangle is a different shade of green, and they all have matching corners in shiny copper. 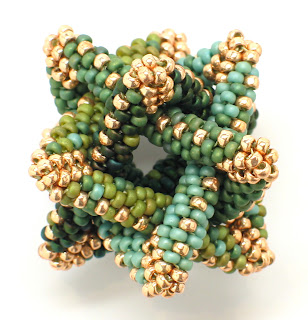 The design for the bead woven triangle was origianlly published by Phyllis Dintenfass in Beadwork magazine, in the Dec 08/Jan 09 issue.  It was republished in the special issue called, "Beadwork presents Favorite Bead Stitches" published July 2010. 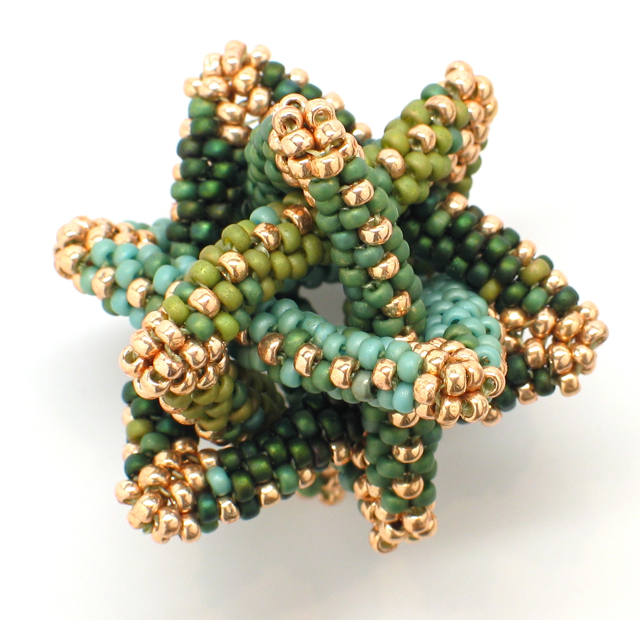 Once I saw Dintentfass' triangle pattern, I knew immediately that I had to use it to make an orderly tangle.  I had been wanting to bead this tangle for a couple of years, and I was thrilled when I found the perfect bead weave to make it.  (It's been sitting in my seed bead box for a year and a half, and I finally got around to photographing it.)  The edge of each triangle is 42mm and the complete tangle measures 48mm at its longest.   This beaded link is sold.
Posted by Gwenbeads at 4:18 PM 3 comments: