Here is my latest beaded bead using my Ionic Polyhedra weave.  This one is based upon the rhombic dodecahedron.  It is 33 mm wide and composed of over 600 beads.  I am happy with the way it came out because it is reasonably stiff and very hollow.  Because it is so hollow and the holes are so large, my boyfriend says it looks like a geode.  I like the way you can see all the way through 4 different holes simultaniously.  The first photo shows this. 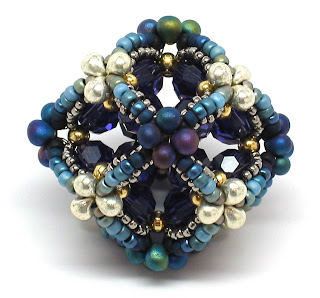 The second photo shows a different type of hole in this beaded bead. 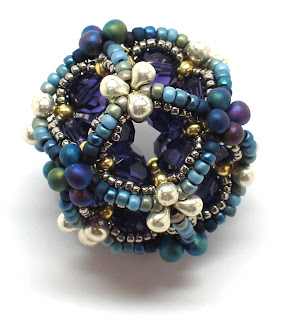 After I took these photos, I found another way to hold it that shows two holes.  In this view below, the large purple crystals in the back show through the holes in the front, falsely making the beaded bead appear solid. 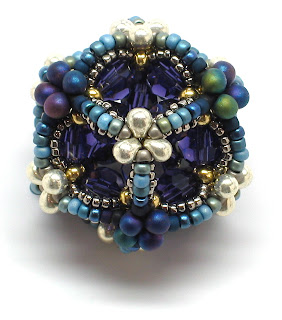 The rhombic dodecahedron is the dual of the cuboctahedron.  Below I show the dual correspondence between these two polyhedra, using my Mini Ionic Polyhedra weave.    I tried to pose the pair of beaded beads so that little gold beads have the same configuration in each photo. 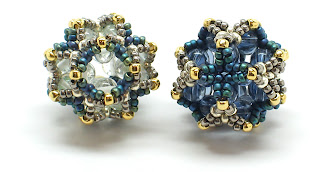 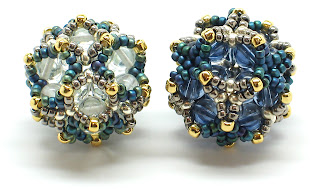 These two little beaded beads are just two centimeters wide, and they are each composed of exactly 288 beads.
Posted by Gwenbeads at 8:38 PM 7 comments: Links to this post

Are you a seed bead weaver?
Do you want to get free patterns from beAd Infinitum?
Do you want a this fancy banner to adorn your blog or website?

Florence and I just put out a call for talented seed beaders who would like to join our design team. Team members get free beAd Infinitum patterns of their choice, each month of the term. In return, team members make and publicly display jewelry on the internet using our patterns. 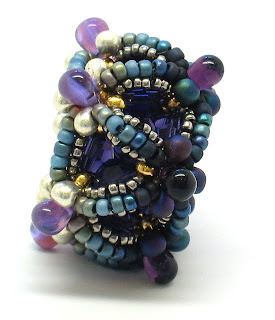 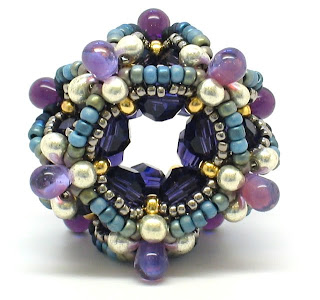 Both photos above show the Ionic Antiprism.    Even with that large hole, it still holds its shape.

My beading buddy Florence and I have been playing around with herringbone stitch for a couple years now, with a recent focus on herringbone cables with just 3 beads per round.  We like the 3 bead version because you get a narrow cable that has enough detail to be decorative, but it doesn't take too much time to weave.

At beAd Infinitum today, we released our newest pattern for weaving beaded beads, the Ionic Polyhedra using a curved version of the herringbone 3-cable.  The idea for the Ionic Polyhedra was based upon a beaded cube that Florence made first.  Florence sent me a photo of her beaded cube, and when I beaded copies, the two in the above photo (center and right), I refined her design to make the beads fit together snugly, and I added some tiny drop embellishments.  The resulting columns of beads remind me of Ionic columns from ancient Greek buildings.  So I named the technique "Ionic," and I began applying it to a wide variety of different geometric objects, like the octahedron shown above (left).

I started writing this pattern back in April, and I just finished adding the reviewers comments today. (Thank you Florence and Cindy!)  To date, this is the longest beading pattern I have ever written, 24 jam-packed pages, with over 90 illustrations and photographs.   I was surprised and happy to find out how many different polyhedra look good as Ionic Polyhedra beaded beads, so I kept weaving more and more different shapes with this technique.   The pattern is so long because I wanted to include all of the different designs.  In particular, I used seven different geometric objects to weave beaded beads in each of two sizes, for a total of 14 different beaded bead designs. I'm sure there are other beautiful Ionic Polyhedra, but at some point I had to declare the pattern finished.

I wrote and illustrated detailed instructions for the cube and octahedron (see above photo) with advanced-beginning bead weavers in mind.  This part of the pattern includes every relevant detail I could think of, including some of the underlying mathematics.  For more advanced weavers, I include lengthy descriptions of how to create other shapes using this technique (including those shown here) and a three page spread showing the steps for an Ionic Icosahedron. A handy table includes seven different geometric objects that I use to design beaded beads, and I include detailed photographs and written explanations describing them all, including bead counts and sizes so you can make them all yourself.

The pattern ends with photos and a discussion for making Mini Ionic Polyhedra, some of which are small enough for light earrings. Finished bead sizes range from 11mm for the Mini Ionic Cube, all the way to 40mm for the Ionic Icosahedron, and everything in between. 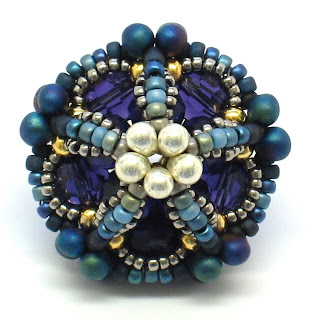 I think the Ionic Pentacluster above looks like a frilly spaceship.
Check out the Ionic Polyhedra to see links to more photos or purchase the pattern.

You can read what Florence has to say about the Ionic Polyehdra on her blog.

Posted by Gwenbeads at 10:41 PM 3 comments: Links to this post

Several months ago, Florence Turnour and I decided to invite, Cindy Holsclaw (also known as beadorigami) to feature some of her beaded bead patterns on our website, beAd Infinitum.  We found her beaded bead designs to be innovative, beautiful, and well designed, so we were obviously thrilled when she decided to join us.  Today, we are releasing her newest pattern, the Balloon Box. I made a Ballon Box while I was reviewing her pattern, and I must say, they are very satisfying to weave.  They are wonderfully tactile since they are a wee bit of squishy, yet they always spring back into place. I'm completely fascinated at how the Balloon Box looks with pearls and metallic seed beads.  Cindy, you found a beautiful way to update the pearl necklace!

Here's the poster announcing an upcoming meeting for the Mathematical Association of America.  It has my bead work on it.  The bracelet is the Night Sky weave, and the beaded bead is from my soon-to-be-released Ionic Polyhedra pattern. 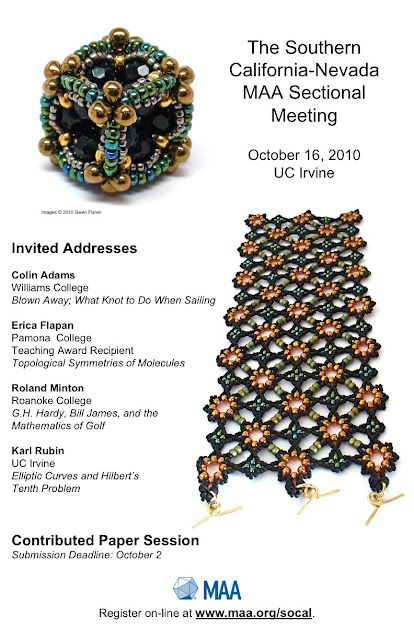 Posted by Gwenbeads at 1:20 PM 2 comments: Links to this post