I've been having way too much fun lately

with my spinning wheel and a crochet hook. I decided that my sweetie and I needed matching hats and wrist warmers to keep us extra toasty on the Playa. I started with two different rovings in lime green, orange, and yellow. The shades of the colors were different in the two rovings, which is how I created these rich color variations. I dyed one of the rovings with Wilton's cake dyes (shown earlier) and purchased the other from Cloudlover69.

I spun four full bobbins of thick-and-thin singles, about 7 ounces total. I used a little more than half for the hat, and the rest for the gloves. I got the idea for the hat from Lexi Boeger's book Intertwined. It's the Urban Hobbit Hat. Lexi's idea for this hat is to assign a different stitch for each color. I used single crochet for green, half double and double crochet for yellow, and bobbles in orange. When I made the gloves, though, I omitted all of the bobbles on the palm of the hand, thought they'd just get in the way. 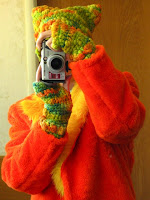 Here's what the set looks like with the fake fur jacket I made.

My sweetie and I are both quite partial to orange and lime, but I made this set for him. Since he kept claiming I'd wear the hat more than he does, I had to make another set for myself. 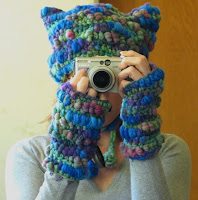 This one uses a blue roving from Chimera and an aqua and pink one I died with Wilton's cake dyes that I showed earlier. For this set, I decided to change the texture as well as the color, so I ditched the bobbles, and I instead used puffs in blue and bullions in pink, along with lots of single and half double crochet. I also added some ties to keep it on my head in

the wind. To make the ties, I knit I-cord with two stitches in each row, and then switched to a crochet hook to make a big old stuffed bobble at the ends. Now, I need to go back and add ties to the orange hat. What I learned: I finally learned how to make a bullion in crochet. They're super squishy and feel nice. I learned that wristies fit better when you add a few stitches around the thumb before going onto the wrist part. In the orange set, I crocheted back and forth to create the thumb hole, but in the blue pair, I just added a few stitches around the thumb instead. Adding stitches was easier and the glove fits better.

Now for the the artsy shots. 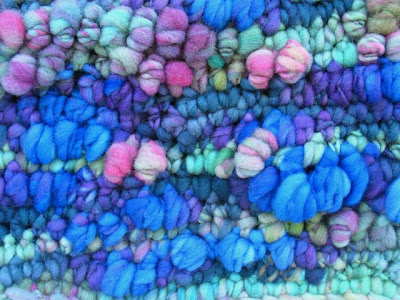 I really love the texture you can get with thick-and-thin singles. 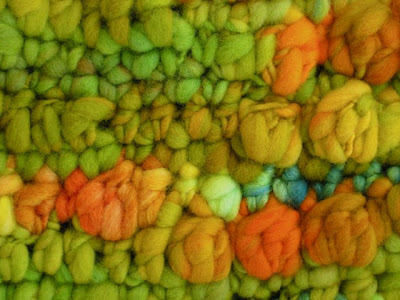 Posted by Gwenbeads at 1:45 PM 2 comments: Links to this post

I have a project article in the current issue of Beadwork Magazine, August/September 2009, Volume 12, Number 5. The project shows how to make an Archimedes Star weave bracelets with seed beads and some large disk beads or buttons.

Archimedes Star is one of many possible star weave designs. This particular one uses stars with three points, joined in circles of 6 stars each. I named this particular weave after Archimedes because it looks like one of the Archimedian tilings with equilateral triangles and regular hexagons (3.6.3.6). 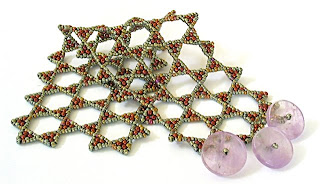 What I learned: I have found that an infinite number of different star weaves are possible. So I started writing a paper on the subject to document how I construct them. You can see my website for two more examples of star weaves including Kepler's Star and Night Sky.