I finished a couple more pairs of DNA beaded earrings.  Measuring about an inch and a half long to the top of the ear wire, these are the shortest ones I've made so far, but the beads in them are really nice, including many of my newest fanciest seed beads.  Plus, those little red sparkling beads that look like garnets are tiny faceted red spinel, a slightly harder stone with a slightly higher refraction index, which means they sparkle just a little more than your typical garnets.  I like the way this color combination is muted without being dull or boring. 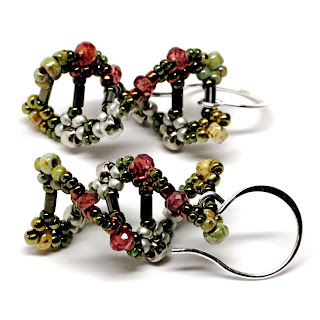 I like this angle for a photo below, but I'm not sure that most people would recognize this as a double helix.  What do you think? 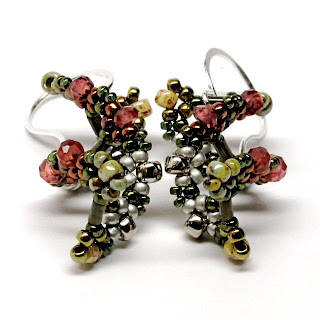 This second pair is a little longer.  The little white beads are rainbow moonstones.  They have flash, but I wasn't able to catch the flashes with my camera.  So you'll just have to trust me on that. 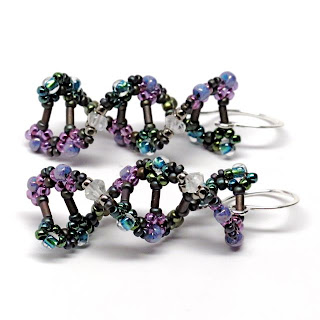 Both pairs are now in my Etsy shop.  Click the photos to see the listings.  Thanks kids.
Posted by Gwenbeads at 11:52 PM 4 comments:

I made myself a little bead crocheted necklace that I loved so much, I made four more for my Etsy shop.  They are orange, mauve, blue and black, and can be worn alone or layered.  Each necklace has three strands of beads crocheted on soft, yet strong, silk yarn.  And I finished each with an antique metal button from my collection. 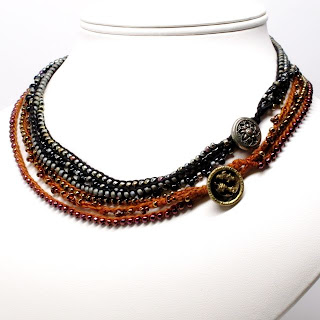 These necklaces are so soft and light, you won't even notice you're wearing them.  I've actually been sleeping in mine it's so comfortable, and I almost never sleep with jewelry on any more.  Here is a close up of the burnt orange one so you can see the cute little button with a clown kneeling to a lady. 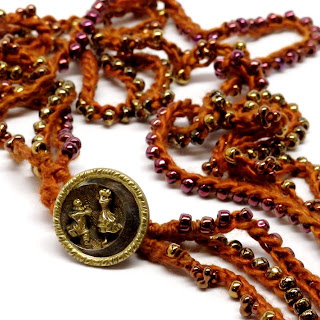 Here are the blue and black ones together. 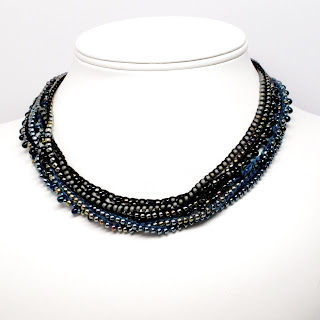 Here is the one I made myself.  I'm a sucker for lime green.  I made this before I figured out that a button makes an even nicer closure on these than a toggle clasp. 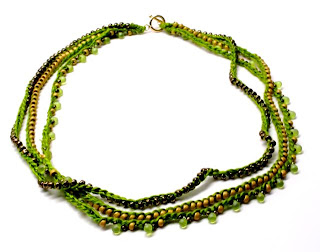 Here is the mauve one alone. Yes, they're simple, but sometimes simple is just right. 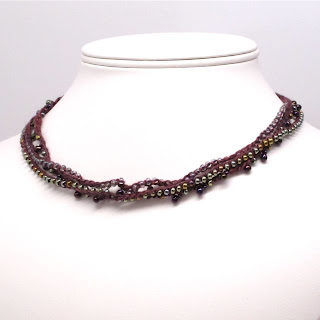 Wonka of Wonderland Top Hat No. 6

This top hat is covered in polyester ultra suede with a sequined sash.  It's the first time I've ever worked with ultra suede, and I love it.  The stitches just melt right into the fabric giving wonderfully smooth seam lines.  And it feels just like real suede.  I'm definitely going to use ultra suede again for covering hats.  This one also has some fantastic lime green sequined fabric for the removable hat band.  It's the same fabric I wrote about in my post Sewing with Sequins.  (My sewing teacher saved me a little piece after the dress was finished because she knew I adore it.)  Since the sequined fabric is stretchy, it holds its position on the hat without any tacking, so it's easy to remove and change out with something else, just in case lime green sequins don't match the rest of your outfit. 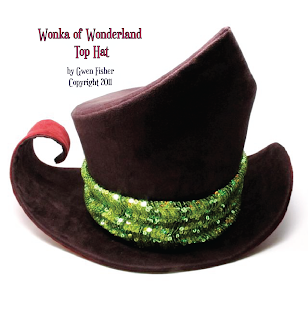 Here is the Hat No. 3, so you can see how it looks when worn.  The colors are very similar to Hat No. 6, but for No. 6, I upgraded to better fabrics. 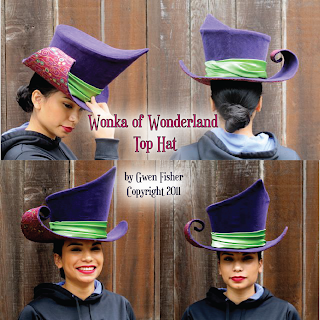 I tried something else new with this version.  I lined the inside edge with elastic instead of grosgrain ribbon as I normally do.  You can see it in the photo below.   You can also see the two little snaps I added in the back to make it tighter.  The elastic and snaps give it about an inch of flexibility in the fitting.  It can be further adjusted by its new owner with some hot steam and love to give it the perfect fit. 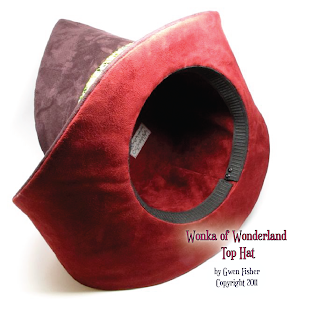 This hat is for sale in my Etsy shop.  Click the photos to go to the listing.
Posted by Gwenbeads at 8:35 PM No comments: 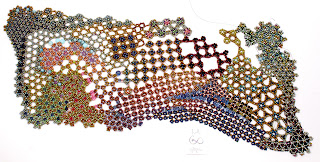 Day 11.5. Because chaos is always easier when you bring a friend...  See the two little fishes?
Ittty bitty fishes in sterling silver.  I've had them for years, and now they have a nice place to swim. 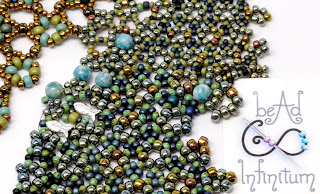 Topological Surfaces in Felt for the Math Nerd in You

You probably don't know this about me, but I love math jokes.  I collect them like I collect beads.  Unlike most people, I think they're funny, or at least, I think they're fun.  There's an old one that goes like this:  Why should you never have breakfast with people who study topology?  Because they can't tell the difference between a coffee mug and a doughnut.  While this joke probably is not very funny, it does illustrate a nice point.  Topology is the study of "properties that are preserved under continuous deformations of objects, such as deformations that involve stretching, but no tearing or gluing."  In other words, if they were made from soft clay, you could deform a coffee mug into a doughnut without any cutting. 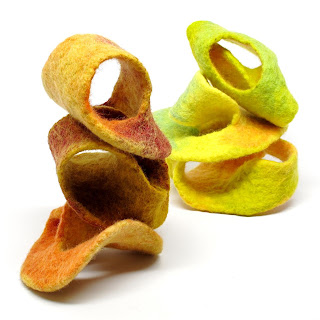 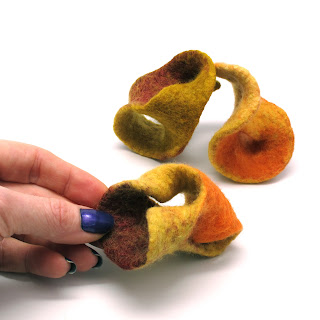 Since I was just making felted wool cuffs, I decided to make some topologically interesting objects, too.  The first set below are all topologically equivalent to a Mobius band with an extra hole.  Like a Mobius band, each piece has one face, but the extra hole gives them all two edges.  Each can be theoretically deformed into any of the other two.  In mathematical terms, each of these surfaces is homeomorphic to the other two. 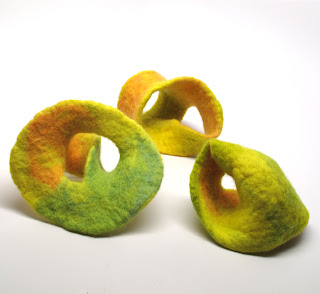 Just like a Mobius band, each piece in the second set (below) also has one face and one edge.  However, these are not Mobius bands.  I don't know precisely what they are, but I know they're not that.  They're a little more complicated, like a Mobius band with a strap attached. 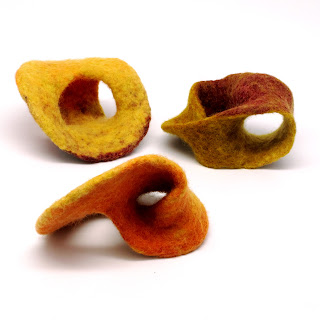 The brownish piece on the top right was just screaming out to be shrunk down and made into a finger ring. So I made a ring in pink and purple wool, and added some seed bead embroidery to make it look nice. 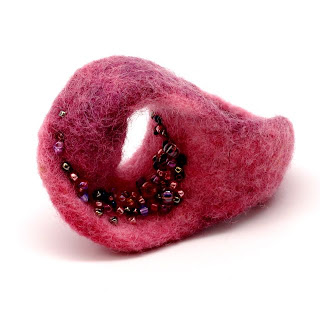 Topology for your finger. 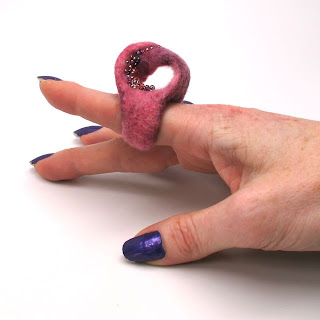 Then, I decided to do some homework to see what other surfaces I could make.   I made this pair of Seifert surfaces of a trefoil knot.  In other words, the edges (or holes) of these little guys form a knot and they each have two faces instead of one.  As you know, most holes in every day objects are (topologically equivalent to) circles.  So, a knotted hole is a very strange kind of hole, indeed!  The one on the left is a little bowl with a funny handle. 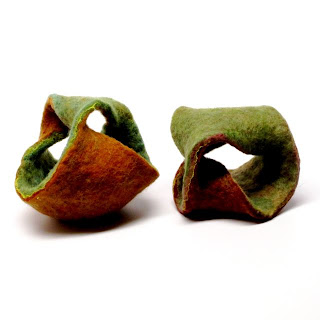 For this pair, I wanted to see what the edges would look like if I trimmed them with scissors.  I think it makes the edge a little more pronounced, but also slightly less durable.   It also let me make them a little more symmetric because I could trim off the wonky bits.   They're still very durable, but they might fuzz a little on the edges if you fiddle with them for a while, but I'm sure they won't rip with normal usage.  I'm not sure what "normal usage" is for such things.  I'll leave that up to you to decide.

They are art.  They are also mathematical models.  They are plushy mind games, cuddly toys for your brain.  These are all available in my Etsy shop.  Click on the photos to see the listings.
Posted by Gwenbeads at 12:59 PM 3 comments: 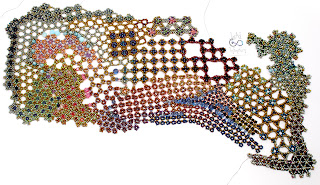 Yesterday was a good beading day until I got to the end of the bottom right corner. I'm having a hard time gracefully joining the different patterns there. So I decided to put that off until another day.

In case you're wondering what I'm going to do with it, here is my first post.  I want it mounted on pins in a shadow box case where the bead work is removable. I need to hire a professional shadow box maker for that. Anybody know a skilled carpenter/ framer in the Bay Area?
Posted by Gwenbeads at 10:28 AM 1 comment:

Day 9. I made it to the right border. Now to just fill in the spaces...

Felt Cuffs in Blues and Greens

Yesterday was cold and rainy, so I made felt cuffs.  I like making felt when it's cold outside because the wet felting process uses lots of hot water, and it warms me up. 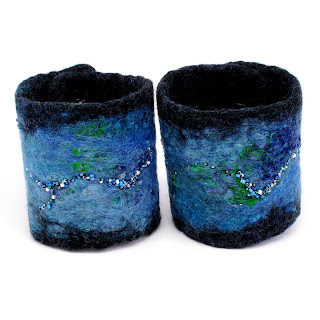 I added a few seed beads to the first pair to give them a little more texture.  I am very tempted to keep these for myself because they go with half of my wardrobe, but alas, a girl's gotta pay her bills.  So they're in my Etsy shop. 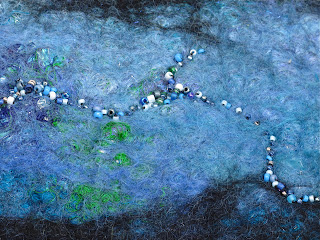 I also made a lime green and aqua pair that reminds me of the colors of the ocean.  Click on the photos to go to the listings. 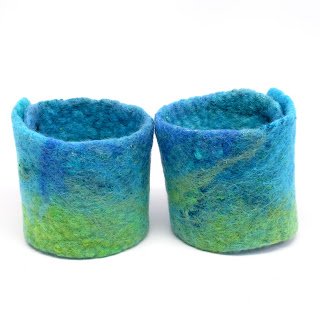 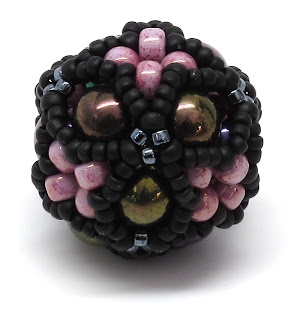 We have a new kit available for the Octahedral Cluster Beaded Bead.  It's got some pretty marbled pink seed beads and a black lace overlay.  I call the color scheme "Black Lace Rose."  This is still one of my all-time favorite designs because it is so round and symmetric.  I still remember the day I designed the very first one back in the Spring of 2005.  I had already patterned the Seven Sisters beaded pendant, with a big 7-star on the front, and I wondered if I could make a beaded bead with 4-stars, six of them oriented like the faces of a cube. For a long time, I had no idea if this new beaded bead design was a cube or an octahedron, but I later decided that it was an octahedron because for the 12 largest beads, their holes lie on the edges of an octahedron.  I also made a couple different versions of a Cube Cluster, but I never liked the way the beads fit together in that version.  The beaded bead was squishy and the shape was not as round as I like. 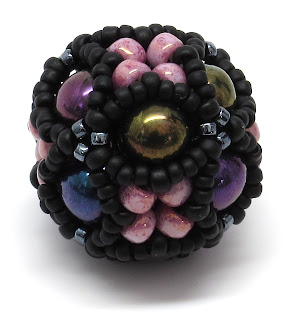 Last Fall, I was asked by the editors of Beadwork Magazine to submit a beaded bead design for their contest on beaded beads, and at that point, I reworked the Cube Cluster design until I got something nice and round like the Octahedral Cluster, but significantly larger.  In the April/May 2012 issue of Beadwork Magazine, I will finally be publishing my pattern for the Cube Cluster Beaded Bead.  So keep an eye out for it.

I'm still beading along on my commission.  I added some new stars on the bottom right. 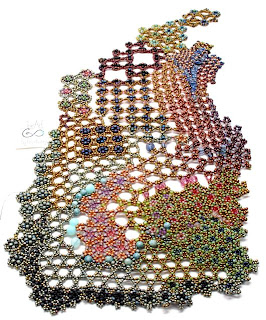 I didn't get too much done yesterday, but there's a bit on the bottom right and top. 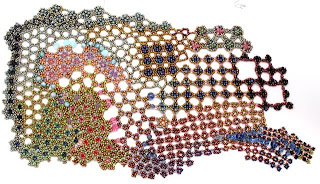 Here's a close up of the super right angle weave in three different sizes.

Just in case you just showed up, here is a link to my first post about this commissioned piece for flat beaded angle weaves.

Here is a link back to Day 6 and forward to Day 8.