The mathematical sculpture that we made 6 years ago, Bat Country, has been selected as one of the 2013 Burning Man Honorarium Art Projects!  This will be the third time we will have brought the full sculpture to Burning Man.  We are honored in being selected given the number of art grant submissions this year.  Thanks to all who have participated in building Bat Country. 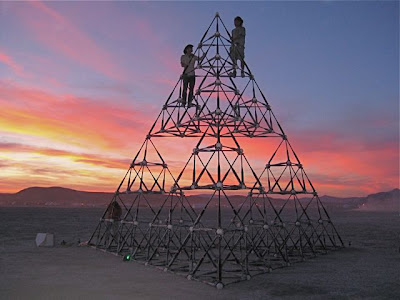 Bat Country is 21’ tall six-sided tetrahedron built from 384 aluminum baseball bats and 130 twelve-inch softballs.  The bats form the structure’s edges; there is one softball at each vertex.

Each edge of the structure measures 26’ in distance. 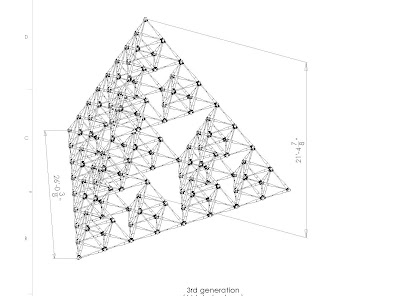 The structure is designed to be and intended to be climbed upon; ½” threaded steel rod runs through the axis of each bat.  These rods bolt to steel joining plates at each vertex.  This provides structural stability and facilitate transportation and on-site assembly. 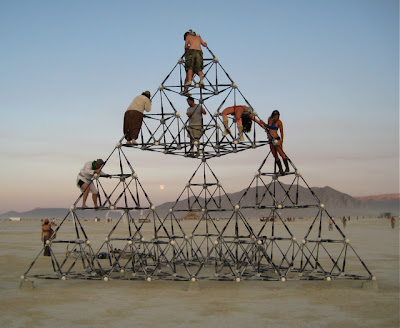 The total structure weighs about 2500 lbs.  We placed a blue LED behind each of the 130 softballs. 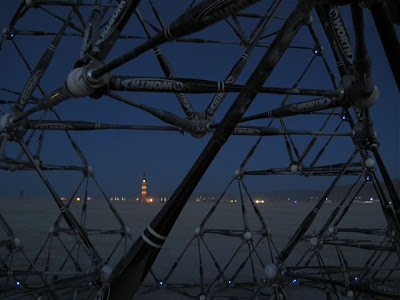 Here you can see Bat Country at an art car party at night.

A propane fireball really lights it up. 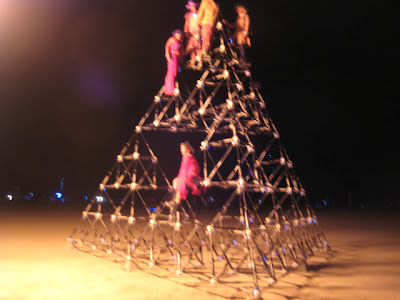 Mathematically, Bat Country is an example of a third-generation Sierpinski tetrahedron. Waclaw Sierpinski was a 20th century Polish mathematician who pioneered the field of fractal geometry; one of the two-dimensional fractals he described was the Sierpinski triangle. His triangle was one of the first shapes understood to demonstrate self-similarity: the property that its shape at any level is the same as its shape at its largest level. The Sierpinski tetrahedron is a three-dimensional shape realizing the same concept – a tetrahedron is a pyramid with a triangular base. 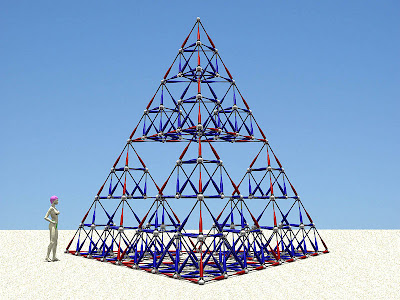 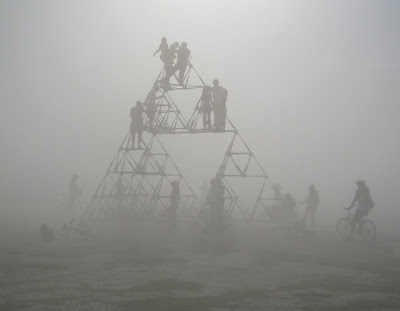 The negative space between each tetrahedron forms a regular octahedron with eight triangular faces. The largest octahedron, in the center of the sculpture, is about 10’ high. This space, large enough for several people to stand in, serves as an inhabitable ‘room’ inside Bat Country. Self-similarly, four smaller octahedrons, one at the center of each second-generation tetrahedron, are each about 5’ high; there are also sixteen small octahedrons, one inside each of the first-generation tetrahedrons. 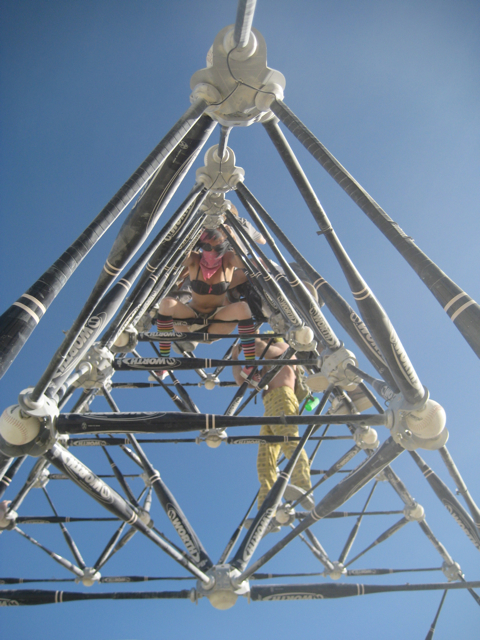 So far, we have assembled the full structure three times: The first time was a test build in South San Francisco, and the other two times were at Burning Man 2008 and 2009. 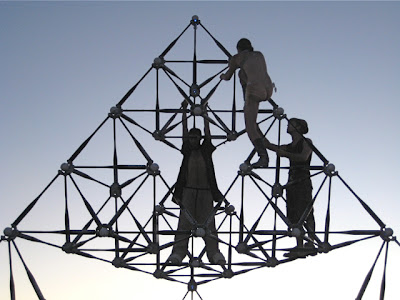 We build it from the bottom up.  It takes a lot of wrenches and hands to work them because this sculpture goes together with a whole lot of bolts.  There is a bolt on both ends of each bat, and 8 more that join 2 steel connectors together where the balls are.  2 x 384 + 8 x 127 = 1784 bolts. 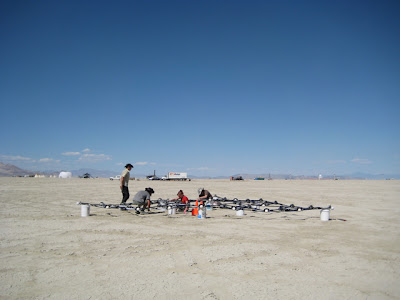 Then we add another 81 bats to make 27 little tetrahedrons. 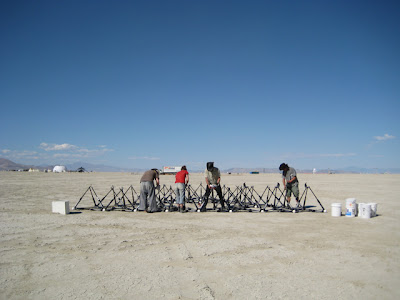 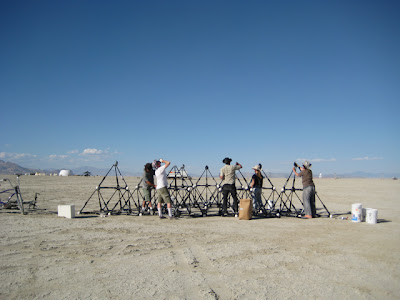 ... and three second generation Siepinski tetrahedrons.  Then, we erect a scaffold and build the top quadrant on top of the other three. 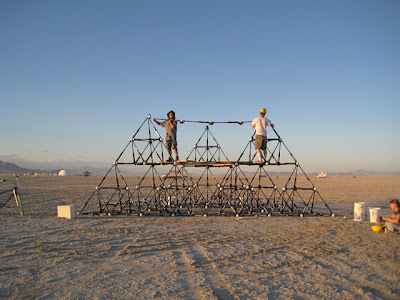 This is the hard part. 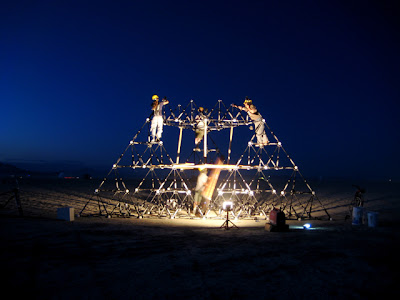 The last bit goes up quickly.

This is some of our campmates and crew. 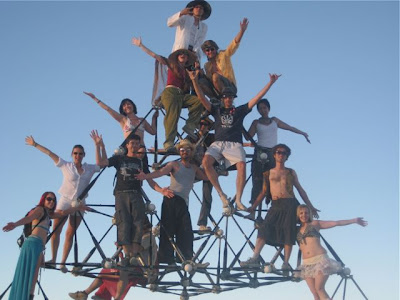 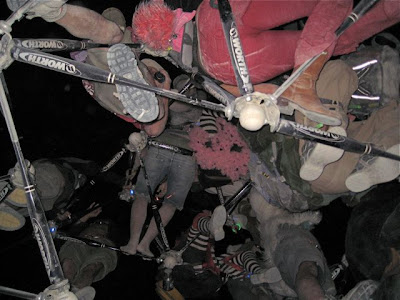 In 2010, we brought a quarter of Bat Country to the Playa to pitch at our camp.  I made some shade panels for it like this, and I plan on making a few more this year.  The panels not only provide shade, but make it more visible from a distance.

This is Paul Brown.  He is Bat Country's engineer. 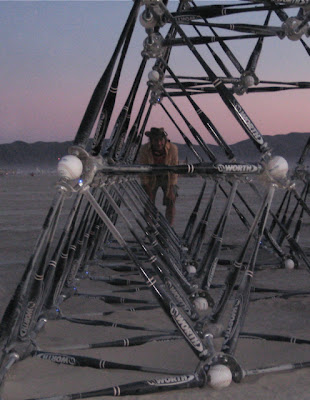 Paul is also my partner.  Here we are together, Paul and me. 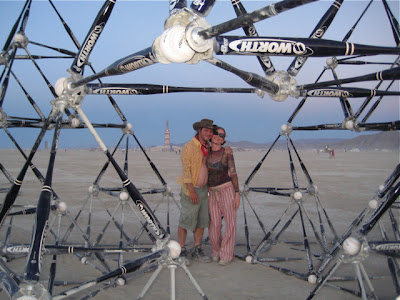 This is me building Bat Country. 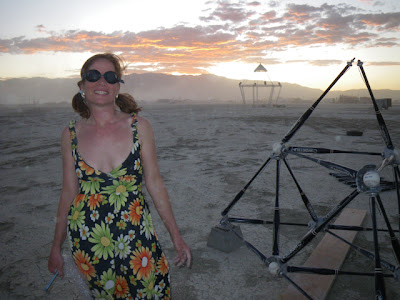 Bat Country was originally modeled after my 3 inch tall, beaded Sierpinski tetrahedrons like these. 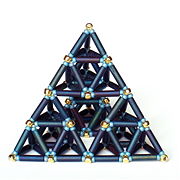 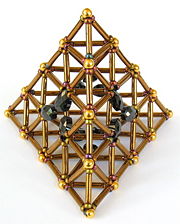 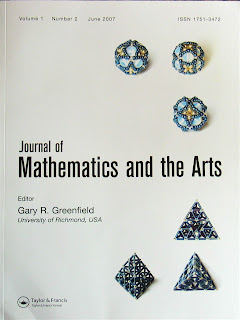 Thanks for looking!
Posted by Gwenbeads at 12:44 PM