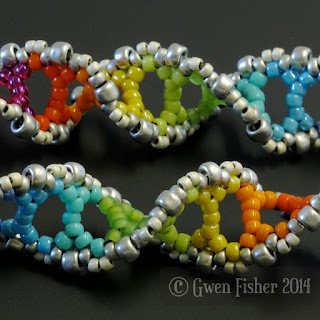 I got such a great response to my beaded DNA earrings that I thought I'd release the pattern as a free video, made with Doceri software.
Be forewarned... this weave is not as easy as it looks.  It requires careful attention to tension or the beadwork won't end up stiff and hold its spiral.  That said, you should still try it out, and let me know what you think.  If you do, I hope you'll show me what you make!

If you just want to have a pair of DNA earrings, without having to go to all of the trouble to make them yourself, I usually have a few pairs for sale in the earrings section of my Etsy shop.

The video shows how to weave a sequence of 5 base pairs recognized from the species Thermus aquaticus.  According to Cindy Holsclaw (beadorigami), T. aquaticus is, "the source of Taq DNA Polymerase, which greatly streamlined the technique of the polymerase chain reaction (PCR), turning it into the indispensable component of biotechnology used today."

COLORING THE BASE PAIRS
Below is a different photo of one of the pairs of earrings I show in the video.  Notice I matched the gray matte beads with copper matte beads, and the shiny gold metallic ones with shiny red metallic. 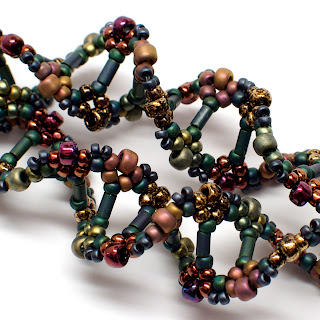 However, in terms of DNA, we use the following pairs of molecules: A~T, T~A, C~G, and G~C.   Thus, a molecular biologist might write the sequence
ACTG ACTG ATCG A
TGAC TGAC TGAC T
or possibly,
CTGA CTGA TCGA  C
GACT GACT GACT G
but in neither case, do I know of any real genetic code that displays this sequence, but with all of the DNA in the human genome, it must be in there somewhere.


After I made the pair above, Cindy Holsclaw pointed me towards some cool links on DNA sequences recognized by restriction enzymes. The sequences in the tables are short (but still in a variety of lengths), and they exhibit nice symmetry, which I think is more interesting than the DNA sequence I used above.   I suggest you check out this list about enzymes; do it for the molecular biologist in you.  I learned a lot by clicking through the table, and it lead me to make this pair of earrings. 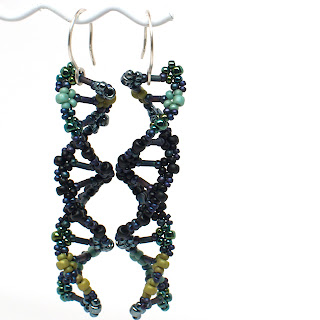 In this pair, the coloring of the base pairs comes from the enzyme PpiI which is found in the microorganism Pseudomonas putida. Pseudomonas putida is a safe strain of soil bacterium, and is the first patented organism in the world. Because it is a living organism the patent was disputed and brought before the United States Supreme Court in the historic court case Diamond v. Chakrabarty which the inventor, Ananda M. Chakrabarty, won. It demonstrates the ability to biodegrade organic solvents such as oil. The specific base pair sequence shown in each earring is
GAACN5CTC
CTTGN5GAG
The N5 means there are 5 Ns there, like NNNNN.  In chemistry, these could be any of G, A, C, or T.  Rather than choose a random sequence of colors, I used matte black beads for all the Ns.  I like the way the coloring worked in this pair.  I was surprised to find that the symmetry and structure of the coloring actually makes me think that it's supposed to mean something.  I am very pleased with this revelation.

TWIST THE NIGHT AWAY!
One final note on chirality, or the handedness with which I twisted the strands.  In terms of beads, the beadwork is flexible, and you can untwist and retwist a helix to make it either handedness, what a spinner would call an S-twist (left) or a Z-twist (right).  In terms of chemistry, most of these strips of DNA usually only appear in one chirality, and so it's the artist in me that takes liberties and twists them makes them a mirrored, matching pair of earrings.

SPLIT DNA NECKLACE
Here's an idea for a necklace I want to try... Make a Y-shaped necklace, where the two sides of the DNA split and become two identical double helices, just like real DNA splits to reproduce itself.

ERRATA
I received a couple very helpful and informative emails from Professor of Biochemistry, Becca Dickstein, and she set me straight about the sequences I used in my earrings and the video.  Professor Dickstein writes, "... the sequences... recognized by the restriction enzymes and are not part of the enzymes.  The enzymes are sometimes thought of as molecular scissors and they recognize a particular sequence in the DNA.  Most of them also cut at that sequence, but some of them recognize at one site and then cut several to many nucleotides away.  (Nucleotides are the bases of DNA: A, G, C, and T, connected to deoxyribose sugars and phosphates.)  The table that Cindy Holsclaw sent you to has the recognition sequences, and the cut sites as well, and you can see that in some cases they are different.  The table also has isoschizomers listed.  These are enzymes from different organisms that recognize the same set of bases."  So, one thing I said in the video about the sequence was technically incorrect since the DNA sequences are not actually found in the enzymes.  I apologize for this error.  Live and learn.

Professor Dickstein further suggests that "if you want to know more about restriction enzymes, a company that sells them is New England Biolabs and you can find a lot of information about them at www.neb.com."