This week, I wrote about beading the hyperbolic tiling (4.5.4.5).  I mentioned that if you take a different patch of this tiling, you can get five-fold symmetry.  To show you what I meant, I beaded the piece shown here.  This time, I also used a much larger patch of the tiling; so it's a lot bigger than the first one.  This side of this pendant shows most of the beaded tiling, including the center of my patch in the center of the pendant. 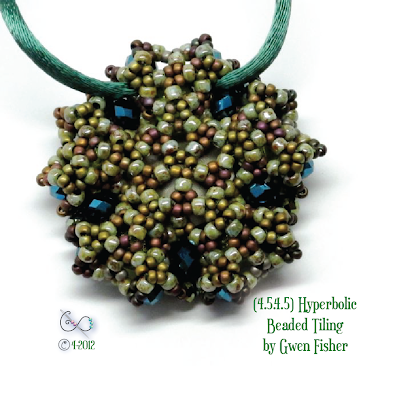 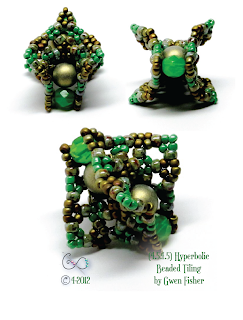 This is one of the reasons that hyperbolic tilings are so different from spherical tilings, like those we usually use to make beaded beads (e.g., a beaded dodecahedron).  You can almost think of a hyperbolic plane as a sphere that's been flipped inside out.  In a spherical beaded bead, the core bead (if needed) goes on the inside, and the beaded tiling goes on the outside.  In contrast, in a hyperbolic beaded bead, the tiling goes on the inside, and the multiple core beads go on the outside.  With flat weaving, there's no core bead at all.  This all corresponds to the fact that spheres have positive curvature, flat planes have zero curvature, and hyperbolic planes have negative curvature.

If you flip this piece of beadwork over (figure 2), you can see most of the larger beads I added to stabilize the angle weave.  From this side, you can also see (almost) the entire boundary of the patch of tiles.  Do you see the ruffled edge of seed beads zigzaging between the larger beads?  Patches of hyperbolic tilings have a lot of perimeter, and if you want it to lie flat like a pendant, you have to zigzag a lot. 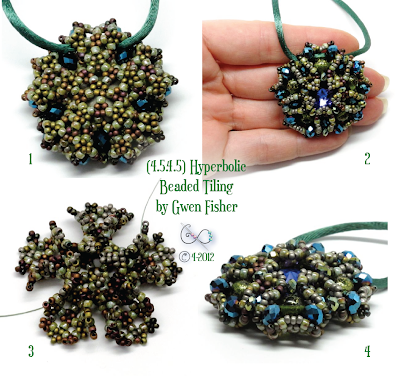 I had intended the side with the big beads, figure 2, to be the front, including the big blue Swarosvki rivoli in the center, but I think I like the other side better.  In any case, the two sides are very different.  They had to be.  This piece has the symmetry of a pyramid or a flower.  The five-fold symmetry in (4.5.4.5) wouldn't allow me to make the two sides the same, even if I tried. (Correction: I could have made the two sides the same if I destroyed all of the reflection symmetries.  In that case, the finished beaded piece would have the symmetry of a barber pole.)

In figure 3,  you can see what the beaded tiling looked like before I added the larger beads and the rivoli in the center.  At this stage, it also had an unfinished edge.  It was quite floppy and uncooperative, and I had to pose it carefully for the photograph.  Smile for the camera.

In figure 4, you can see how flat the finished pendant is.  With a little doing, I was able to make the finished piece pretty flat, just 12mm thick, which is a good size for a pendant.

You can see that I strung the cord right through the holes in the angle weave.  There were several holes to consider, and I had to try a couple to find one I liked.  I was thrilled that I could string the pendant directly onto cord because the piece I showed in my last post has no great way to hang it.  It was somewhat of a beaded bead fail, but since it was a prototype, a first try at something new, I forgive myself.  I already have a whole pile of beaded checkers, pretty little sparkly clusters with no good way to string them. Yet beaded angle weaves have built in holes big enough for cord, so as long as you don't cover them all up with the larger beads, you can use them to string the finished piece.  Nice.

More? See hyperbolic beading No. 3.
Posted by Gwenbeads at 10:06 AM